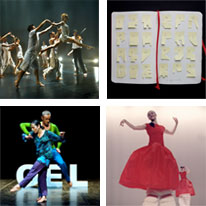 Àngels Margarit belongs to the first generation of contemporary dancers who came out of the Institut del Teatre de Barcelona in the 1970s. She later continued her studies in different parts of Europe and in New York. Since that time, she has dedicated herself to dance in its different aspects, as dancer, choreographer, and teacher.
Between 1979 and 1984, she was part of the collective group Heura, one of the pioneer dance formations and a reference for dance in our country, which went on to project itself beyond our borders, winning prestigious international prizes of the time. Inside Heura, she began her career as a choreographer, and special mention in this regard should be made of TEMPS AL BIAIX (1981), the country’s first dance performance conceived as a one-unit piece. After five years with the collective, she decided to work on her own and created MUDANCES (1985), a dance for five dancers that gave her company its name.
Parallel to this, Margarit became associated with other choreographers to open Bugé dance centre (1984), a space where she continues to stage the company’s rehearsals and which has been the training centre for many current professionals.
With the first performances, MUDANCES (1985) and KOLBEBASAR (1988), Margarit would enter the international scene in which she would regularly present her work. The series SOLO PER A HABITACIÓ D’HOTEL (Hotel Solo) (1989-2000), ATZAVARA (Century Plant) (1991), COROL.LA (1992), GREVENHOFKAI (1992), SUITE D’ESTIU (Summer Suite) (1993), SAÓ (1995)—in collaboration with Maria Muñoz— ARBRE DE TE (Tea Tree) (1996), TÈRBOLA (1998) L’EDAT DE LA PACIÈNCIA (The Age of Patience) (1999) L’EDAT DE LA PACIÈNCIA/00 (2000), PECES MENTIDERES (Deceitful pieces) (2001), EL SOMRIURE (The Smile)  (2001), ORIGAMI (2002), for young audience, ESTANCES (2003), a performed installation, URBS (2004), a special urban-project, SOLO POR PLACER (2005), and LARANDLAND (2006) and the laboratories ARBRAÇADA#1 (2007) and ARBRAÇADA#2 (2008). These choreographies and activities have been coproduced and presented at festivals and programmes in Europe, Canada, the United States, South America, Japan, and Australia.
As an improviser Margarit has collaborated with Andreu Corchero, Maria Muñoz, Rosa Muñoz, Alexis Eupierre, Mònica Valenciano and with musicians Joan Saura, Steve Noble, Agustí Fernández, Marc Egea amongst others.
In videodance she has created the pieces BOQUERIA in collaboration with Johanne Charlebois, EL MAR, with music by Agustí Fernández, for the programme GLASNOST (TV Catalana) SUBUR 305, PEIX, RITUAL GEOGRÀFIC and COS RECORDAT  in collaboration with Núria Font and DU PARC#1410 with Walter Verdin.
As a teacher, she has given courses and workshops in Spain, France, Germany, Finland, Canada, Colombia, and Venezuela, and she directed the Conservatori Superior de Dansa (CSD) de l’Institut del Teatre de Barcelona in 2006/07.
Throughout her trajectory, Margarit has received numerous prizes, such as the Grand Prix du Concours Choregraphique de Bagnolet in 1988 for KOLBEBASAR or the Premi Nacional de Dansa de Catalunya in 1986 for MUDANCES and in 1991 for ATZAVARA or the Premi Ciutat de Barcelona d’Arts Escèniques in 1993 for COROL·LA, among others.
At the invitation of the City Council of Terrassa, she conceived and was artistic director for Tensdansa, the international dance festival of Terrassa, between 2003 and 2007.